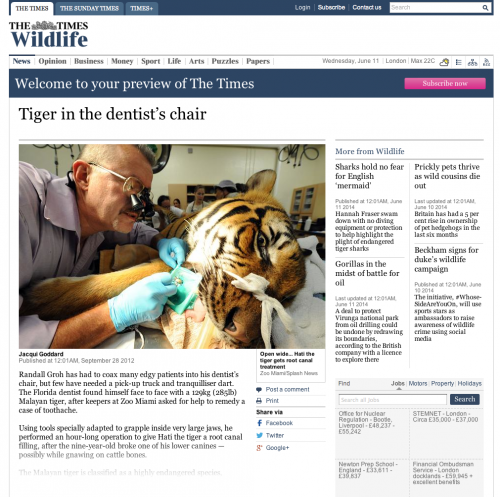 The Dental Leaders team has been chosen to provide high-level dental services to the animals of Zoo Miami, Jungle Island, and also for the great apes at the Monkey Jungle attraction and research facility.  Special credit and thanks are well-deserved for Dr. Chriss Miller, Head Veterinarian at Zoo Miami;  Dr. Bern Levine, owner of Jungle Island;  and Sharon Du Mond, owner of Monkey Jungle.  These services are provided to the citizens of Miami-Dade County and are totally pro bono.

Most of the treatments required are root canals.  Common injuries to carnivores are "slab fractures" of canine teeth.  These are oblique fractures that make the tooth appear to be split in half, but almost always leave enough structure to maintain the tooth.  This situation exposes the nerve of the tooth, which dies and can get infected.  If not treated, the infection can hamper the animal's ability to eat.  The big cats also use their teeth in sexual behaviors.  Nerve death can result in septicemia, and eventually death of the animal after extended suffering.

Animals treated by the dental leaders team in the past include:

African Wild Dog:   Several root canals, extractions, and fillings have been provided, as well as a difficult surgical root canal treatment.  Astute zoo handlers at Zoo Miami noted that one of their prize African wild hunting dogs was off his feed.  Head zoo veterinarian Dr. Chriss Miller found many infected teeth and a large abscess draining downward
through the animal's chin to the outside.  The doctors were called in to treat the suffering animal's many needs.  Dr. Miller anesthetized the dog and took diagnostic x-rays.  Several infected teeth were found that required extraction.  One upper and one lower canine tooth were found to require root canal therapy and strong bonded fillings.  The lower canine was determined to be the cause of the draining infection, and was treated with an outside-the-mouth approach to root canal therapy called an apicoectomy.  The wild dog did well through the procedure and was on several weeks of antibiotics afterward.  Later that year, the same wild dog became the father of a large litter of puppies!

Dental Leaders doctors have now treated a total of seven wild dogs, who seem to be especially hard on their teeth.

Asian Bull Elephant:  A partial root canal and filling was performed on a fractured tusk for Dahlup, a 38-year-old Asian Bull Elephant.  The problem was found by head  veterinarian Dr. Chriss  Miller, who identified a longitudinal fracture in the elephant’s right tusk.  Both tusks were cut back by the mahouts to prevent further fracture into "Dahli's" maxilla. Upon conducting this procedure, with Dahli wide awake, Dr. Miller found that some of the nerve tissue inside the tusk had not receded with growth as it should have.  The Dental Leaders team was called in to place a palliative dressing inside the nerve canal and seal the tusk imperviously in the hope of preventing contamination of the living parts of the tusk, closer to and into the animal's skull.  Thus, a partial root canal and bonding were provided for Dahlup, all while he was wide awake!  Dahlup's behavior was excellent, in fact he was quite social throughout the procedure, and lumbered straight off to the play yard when finished.

Lowlands Gorilla:  Fillings, several extractions, and cleaning have been performed on King, the venerable gorilla at Miami's Monkey Jungle.  He and his trainers have a great relationship made possible by excellent communication between them.  Early in 1997, King began approaching his trainer after every meal and pointing at his mouth.  He would then open his mouth and allow his trainer to remove food packed into what was an obvious large cavity.  Owner Sharon Du Mond arranged with Doctors Groh and Souviron to provide King with necessary dental diagnosis and care.  Dr. Chriss Miller, head veterinarian at Zoo Miami kindly donated her services for King's anesthesia.  Groh and Souviron provided King with a good cleaning, a filling, and gentle extraction of an unfortunately hopeless molar.  King was also carefully examined by Dr. Miller and a cardiologist and was found to be in tip-top shape.  He recovered quite well and remains the happiest citizen of Monkey Jungle.

White Bengal Tiger:  Root canal and fillings were performed for a fractured tooth on Carlita, one of Zoo Miami’s three white Bengal tigers.  She was seen to have broken her lower left canine tooth on the bars of her cage. Careful diagnosis by her handlers and Dr. Chriss Miller, head veterinarian of the zoo, showed that a portion of the big cat's nerve was actually exposed and the tooth thus required a root canal to prevent further infection. Dr. Groh and Dr. Souviron were called in to provide this delicate care. Dr. Miller supplied the general anesthesia to keep Carlita in a cooperative mood.  After an exam and x-rays, Carlita was moved to a very large operating table where she remained for the hour-long procedure. She had no complaints upon arousing from her anesthetic and was back in her habitat very quickly after her dental siesta.

Malayan Tiger:  A much needed root canal for a gorgeous big cat got international press coverage for Doctor Groh's gentle care.  Tigers have the largest canine teeth, with the longest roots, of all of the carnivores.

African Lioness:  Gingivectomy of infected tissue was completed, as well as a root canal and filling on a fractured tooth.  Of interest is the birth of a new set of cubs at Zoo Miami- be sure to visit and support our zoo!